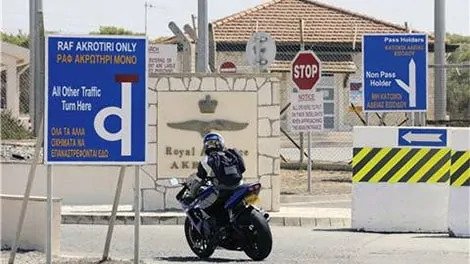 CYPRIOTS who own land in non-military areas inside the British Bases will be able to sell or develop their properties, following a milestone agreement between Cyprus and the UK.

In what was hailed by President Nicos Anastasiades as a historic moment, Cyprus and the UK signed an agreement which will see the British Bases allowing the development of certain areas for the first time since independence in 1960.

“I think today is a historic day for the residents and owners of property inside the territory controlled by British authorities, but also concrete proof of the excellent relations between the Republic of Cyprus and the United Kingdom,” Anastasiades said at the signing ceremony in Nicosia.

The agreement concerns 18 Km² of around 254 Km², or 3% of the island’s territory — retained by former colonial ruler Britain in Akrotiri in Limassol, and Dhekelia, Larnaca, as sovereign territory used as military bases.

Under the 1960 Treaty of Establishment of the Republic of Cyprus, properties inside the two areas could only be used for agricultural purposes by their owners.

Furthermore, they could only be developed under strict regulations, which included owners being native to the area and that they did not possess any other property.

The process kicks-off with the publishing of the Strategic Environmental Impact Assessment (SEIA) report relating to the arrangement, together with the Development Plan by the Environment Department and the SBA Administration.

The documents have been posted on the Websites of the Town Planning and Housing Department.

Interested parties will have 35 days to submit any observations or objections related to the content of the Strategic Study, as part of public consultation.

Some landowners may not be able to make use of their properties as it may fall within the limits of a protected area under the NATURA 2000 scheme, or other protected wildlife habitats.

The Environmental Impact Study will essentially denominate zones in which development will be allowed.

Essentially, Cypriots owning land in non-military areas in the UK Sovereign Bases which does not fall in an environmentally protected area will be allowed to sell and develop their properties after 60 years as Cyprus and UK come to an over the matter.

Essentially, Cypriots owning land in non-military areas which are not environmentally protected will be allowed to sell and develop their properties some 60 years after the declaration of Independence.

“The agreement constitutes the biggest change in land use and development of various zones inside the bases since the foundation of the Republic of Cyprus,” said Anastasiades.

The Agreement implemented on Tuesday was reached on 15 January 2014 between the then Prime Minister David Cameron and President Anastasiades.

British High Commissioner Stephen Lillie said the discussions between the sides were complex, but they are an indication of the commitment of the two countries to developing bilateral ties and finding new areas of cooperation.

As Lillie explained, residents of the Bases will now be able to enjoy the same rights as Cypriots living on areas controlled by the Republic to sell and develop their land.

“This will bring very obvious benefits to the 12,000 Cypriots who live in the Bases.

“At a time when the spread of the coronavirus is generating fear and uncertainty about the livelihoods of communities the world over, I take pride in the fact that we have worked together to deliver a change that will have a real and positive impact on people’s prosperity,” said Lillie.

The accord also allows for building petrol stations, restaurants and other small-scale developments.

In comments to CyBC radio, Pantelis Georgiou the Mayor of Ypsonas, a village in Limassol, welcomed the agreement, saying that residents in the Bases have waited for six years for the agreement to go ahead.

He noted that residents will be given room to breathe, especially those who had mortgaged their properties at some point but were not able to put them to use to pay off their loans.

“The agreement will bring about significant development of the areas inside the Sovereign Bases,” said Georgiou.