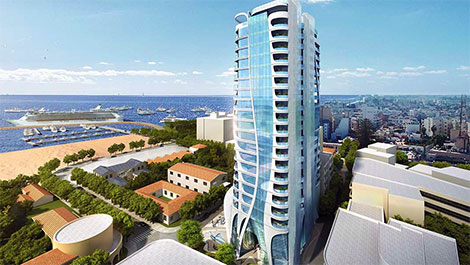 In Larnaca, some 20 – 30 high-rise residential developments and hotels ranging from 10 to 30 stories are in the pipeline with construction expected to begin over the coming years.

LARNACA is to see its fair share of new developments with several high-rise building projects being put forward from local and foreign investors.

Once lagging behind other towns in Cyprus regarding development in the construction sector, Larnaca is catching up with rebuilding the Larnaca Marina and a new shopping mall, while gaining height with property projects aiming to draw in mainly investors eyeing the Citizenship for Investment scheme.

Some 25-30 residential developments and hotels ranging from 10 to 30 stories are in the pipeline with construction expected to begin over the coming years, according to municipal councillor Athos Kalantzis.

He told Stockwatch the council has already awarded the necessary building permits to some projects which have started construction.

Larnaca’s Makarios Avenue is set to host two tower-type buildings, with one such project being the 11-floor property belonging to Gaia to be built on the corner of Makarios Avenue and Filios Tsigarides.

The second project is expected to be built within the parking lot of the old Orphanides supermarket. The project belongs to a Lebanese investor who plans to build a 35-storey tower, with authorities recommending that the building be restricted to 30 floors.

Meanwhile, work on the 20-storey “Kition” tower are pending final building approval. The tower is to be erected on Makarios Avenue opposite the town’s police headquarters. Kition is to be built by Quality Group who constructed the Radisson Blu hotel that opened last year.

A group of foreign investors has filed for permission to build a 30-storey building on Seferis Street with authorities indicating that they would only consider a high rise of up to 15-stories to be built in the area.

Environmental authorities are looking into a request for a mixed residential development, which includes a 30-storey tower and a 10-storey hotel in the heart Larnaca’s Phinikoudes promenade.

The project is promoted by Russian firm Lanomex. The building is to be built in the area which currently hosts Hobos Café.

Kalantzis told Stockwatch, interested developers are planning to make the most of various incentive packages in order to raise the allowed building coefficient.

He said, developers are buying building coefficients from neighbouring preserved older buildings, while also taking advantage coefficient with the use of Renewable Energy technologies.

Kalantzis said that with these two incentive packages, developers gain a 10-11% increase on the building coefficient.

He said the majority of investors building high-rises in Larnaca are from China, Lebanon and Israel.