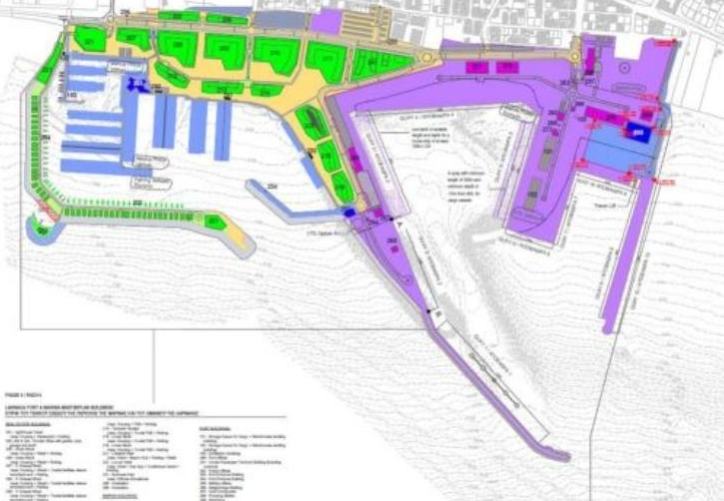 The 4 Phases Of “Transformation” Of Larnaca Marina

According to the MEEP, the main goal of the renovation of the Larnaca Marina is the redevelopment of the marine area of the Marina in order to achieve a minimum capacity of 600 berths for yachts up to 115 meters in size.

The landscape of the proposed projects of Limenas and Marina, in their full development, is depicted below:

The implementation of the Master Plan is expected to take place in four distinct phases.

“During the construction, the disruption of the existing operations of the Port and Marina will be reduced to a minimum through a series of measures which concern the environmentally rational design as well as optimal construction techniques. It is noted that the project will significantly contribute to achieving “National goals for the development and promotion of the region, the improvement of the living standard of the inhabitants of Larnaca, but also of the citizens of the Republic of Cyprus in general”, the study states.

• The two existing breakwaters of the Marina will be demolished and replaced with new breakwaters, in order to expand the marina basin, so that it can provide the minimum required number of berths according to the concession contract, ie 600 seats.

• On the west side of the Port area, the main buildings to be demolished are:

– an existing workshop and,

– the building of the Ministry of Agriculture.

• Some other sheds located near the existing rainwater canal will also be demolished.

• In the south of the area of Limenas (Pier 3), a shed of 11,680 m2 will be demolished for the construction of the new cruise terminal.

During the Initial Development Period, the new buildings that will be constructed are:

Beach Hotel, which will be built near the Preserved Pier.

• Mechanical Electrical and Hydraulic Installations, as well as a Marina Services Building, to serve the needs of the expansion of the Marina.

• Recharge station for yachts in the leeward breakwater.

• Construction of a registrar.

• Limenas Office Building, in the Northern area of Limenas, with access from Finikoudon Avenue. This building will house the offices of the port authority, the ALK, the Kition company, the customs, as well as other local services. Access to this building will be from the outside and inside of the Port fence.

• Building of the Ministry of Agriculture.

• Cruise Terminal. This building will have an area of about 1000 m2 in Phase 1 and will serve cruise guests. In addition, the required parking / waiting areas will be constructed.

• Installation of a workshop to replace the one that will be demolished.

During this initial period of development, roads, networks and sidewalks will be constructed to comply with the minimum requirements to connect the development area with the city. Indicatively, the new pedestrian street of the Marina, the Yacht Club and the Cruise Terminal will be connected with the coastal road and the avenue of Finikoudes.

The coastal road will be at least 25.5 meters wide, extending the current path by 1 km.

Also, most of the central park will be developed during the first phase, but will be completed during the second phase.

The extension of Finikoudon Avenue will be constructed during the initial period of development, will extend from Europe Square to Nikolaidis, and will be connected to the rest of the city. A new road will be constructed from this road that will lead to the new cruise terminal, along the Port to access to the terminal.

In this phase, all parking spaces located to the west of Finikoudon Avenue will be developed.

In the area of the Marina, both existing breakwaters will be dismantled, and two new breakwaters will be constructed, which will expand the basin, creating a total of 600 berths. The leeward breakwater will have a total length of about 1135 meters, while the leeward will have a length of 350 meters. The operating depth inside the Marina will be -5.0 meters, with the exception of the area near Limenas, where there will be the possibility of mooring a yacht up to 115 meters. In this area the operating depth will be set at -6.5 meters. In addition, a floating pier is constructed on the windshield on the inside to be used as a pedestrian walkway.

The fishing boats will be accommodated within the development area (Limenas / Marina) meeting the requirements of the Concession Agreement. In addition, the floating pier on dock 4 will be demolished to extend the existing dock approximately 80 meters to the east.

The projects planned in Phase II, will include the majority of the planned buildings, the completion of the public space, as well as several interventions in the areas of the Marina and the Port, as described below.

During Phase II, the new buildings that will be constructed will be:

All low-rise buildings (212, 213, 214), four medium-height apartment buildings (207, 208, 209, 210), high-rise building on the west side of the new boulevard (206) and the academic and office buildings to be located in northern end of the area (241). The relevant electricity substations required for their operation will also be constructed.

The Yacht Maintenance and Repair Shed (253) will be constructed in the north to meet the Minimum Requirements of the Concession Agreement, as the previous yacht repair facility will be demolished at this stage.

In this phase the following buildings will be constructed:

In this phase, the respective common areas of the coastal walking route and inside the park (Inner Park) are completed.

During Phase II in the northern part of the Port, a new landfill site for the Marina of at least 20,000 m2 will also be constructed, in order to meet the Minimum Requirements of the Concession Agreement. This landfill area will be transferred from Phase I. Vehicles for this area of the Marina will be served by a new gate on the north side of the main port area of Limenas.

In the area of Limenas, an extension of the southern quay will be constructed by approximately 300 meters (Pier 2) with an operating depth of -13.0 meters.

In addition, the dock 1 will be constructed with a length of 670 meters and an operating depth of -14.0 meters.

The road network includes a main internal road and two complementary roads. The main inner road starts from the main gate of the Port area and includes 2 lanes in each direction 3.5 meters wide each. At the end of the 2-lane road, an area has been designed where all the necessary checks are carried out, especially for vehicles using the loading / unloading area. A new street will be constructed at Pier 2, in order to give access to the office building (265).

The projects planned for Phase III concern several extensions in the areas of Marina and Limenas and some real estate buildings, as described below.

No demolition is expected at this stage.

During Phase III, the new buildings that will be constructed are:

During this phase, the Marina windward breakwater will be completed, offering new land for the construction of about half of the detached houses along the pier (204) and an iconic Lighthouse Residential Tower on the acromion (201).

In the area of Limenas during Phase III the construction of the following quays will be completed:

Pier 7 will have an operating depth of -10.0 meters and Pier 6 which will be extended by 340 meters. In addition, docks 9 and 10 with a length of 400 meters with operating depths of -6.0 and -12.0 meters respectively will be constructed.

In the area of Marina, during Phase III, the windward breakwater is completed with the construction of prefabricated artificial boulders and floors. In addition, a floating pontoon is built on the inside to be used as a pedestrian corridor.

The landfill will be refurbished after the pier is extended 8.

In this phase the development is completed:

During this phase, part of the leeward breakwater will be demolished, to allow boats to access the private island.

The new buildings that will be constructed are:

The rest of the houses on the windward pier and a private island in the southeast corner of the new breakwater, which will house an exclusive house, accessible by boat or car (via a supporting bridge) from the windward side of the breakwater.

The last multi-storey building to the west of the avenue (205) is also under construction, together with the adjacent plot (PUB-IN.PK-03) which provides parking.

The building of the Cruise Station will be completed reaching approximately 2,350 m2 and will support the operation of the station as a home porting. The remaining required parking / waiting areas for the cruise building will also be constructed.

In the area of Marina, during the final phase of construction, the Private Island of 2,400 m2 will be constructed, in the windward breakwater of Marina.