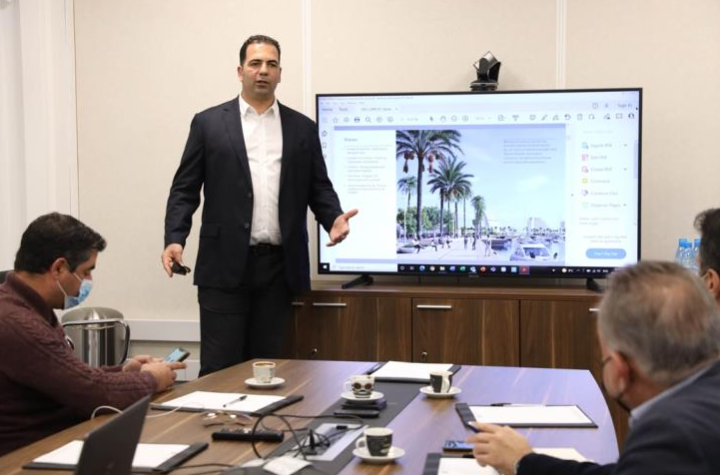 The master plan for Larnaca Marina Port was closed

The Minister of Transport, Communications and Works, Giannis Karousos, expressed satisfaction with the implementation process of the largest development project of the Republic of Cyprus, who was briefed today on the final General Spatial Plan for the Port and Marina of Larnaca. The project is part of the Strategic Planning for the Development of the Port and Marina in Larnaca, and is expected to be completed in four phases.

Speaking after the presentation of the General Spatial Plan, the Minister of Transport characteristically stated that the submission of the final Spatial Plan is an important development that shows the will of both the Government and Kition Ocean Holdings Ltd to proceed quickly with the completion of the project.

“This is the largest investment, with a budget of up to 1.2 billion euros. An investment and an initiative announced by the President of the Republic, which is being implemented. We know very well what it means for the citizens to turn words into deeds and today with the submission of the final General Spatial Plan we send the message that we are moving forward, that we are within the timetables, so as to deliver the Port and Marina of Larnaca on the 1st “ April to the investor”, underlined Mr. Karousos.

Mr. Karousos, on the occasion, thanked Kition Ocean Holdings Ltd and the CEO Mr. Panos Alexandrou, for the good cooperation, as well as the Port Utilization Team of the Ministry, which works for the implementation of the project under the guidance of the General Director of the Ministry of Transport Mr. Stavros Michael.

For his part, the CEO of Kition Ocean Holdings Mr. Panos Alexandrou stated: “Today we have managed to complete an important milestone by submitting the final form of our master plan. The next stage is its approval and signature and its complete submission to the town planning authorities, so that it can be approved, something which we hope will be done in the next 10 days or so. We are pleased to report that everything is proceeding according to our schedule. We are ready to start the construction works, which we hope will start from the 1stApril, the same day we will undertake the project. As the first project we have the upgrade of the protected dock and the construction works of the infrastructure will follow, which are necessary for the subsequent completion of the project. We are talking about a project that, as the Minister mentioned, is of the order of 1.2 billion euros, which we intend and plans to complete within 12 years, with the first phase lasting the first 5 years. I can not fail to thank the team of the Ministry of Transport, the Minister, the Director General and his team, as well as all the Government Services, with which we have a perfect cooperation so far. We are proud because it is something that has not been done again within the timeframes set from day one, to be kept, observed and completed.